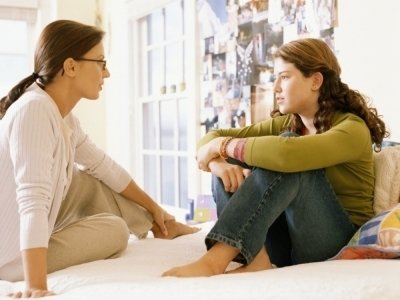 Giving your kid the sex talk is probably one of the most important conversations you will ever have with your children. Sex and puberty are a part of growing up, and as we all know, growing up is a scary thing. However, kids are beginning to have sex earlier and earlier because of peer pressure and the media that influences them. So let’s relax a little bit and figure out what to do when giving your kid the sex talk.

One of the first things to do when giving your kid the sex talk is to start talking about it early. Because teenagers start having sex earlier and earlier these days, it would be beneficial to have the sex talk with them earlier rather than later. Many teenagers say that their parents never even had a sex talk with them. I know that kids are even having sex in Middle School now, which means that they are around eleven or twelve years old.

Try not to sugar coat anything. I’m not saying that you have to give your four year old a detailed description of the birds and the bees, but you shouldn’t just say that they just showed up on your doorstep in a basket and you were destined to take care of them.

Try to be open with your kids about everything. Answer every awkward question that they have, because the more laid back you seem about the subject, the more comfortable they will be coming to you for advice and help when it comes to sex.

I think that it is a good idea to involve both parents because you can get a perspective from both a male and a female. I wish that I had my dad there to tell me that there will be a bunch of hairy guys with raging hormones that will constantly try to sleep with me.

5. Ask What They Know

Before you have the sex talk with your kids, ask them what they have already learned from school and from friends. Most kids are grossed out in health class, and they are more entertained by their friend’s sexual stories that are made up most of the time. This way you can clear up what they don’t know and you can correct what they think they know.

I know that when I first learned about the reproductive organs of men and women, I got a little freaked out and intimidated at how complicated everything was. Don’t show them every terrifying looking STD out there right off the bat. Ease that stuff in later.

7. Tell Them What You Wish Your Parents Told You

Everyone truly learns about sex from personal experience. I bet that there were a few things that happened to you that you wish someone told you about. Tell your kids what you wish you knew, so they can be more prepared when the time is right.

The sex talk is probably the most awkward conversation that you can have with someone. Many schools are dropping health classes and kids are not being educated about sexual health. They need to know that while sex might be fun, there are also a lot of responsibilities and risks that come with it. What are some things you think you should do during the sex talk?