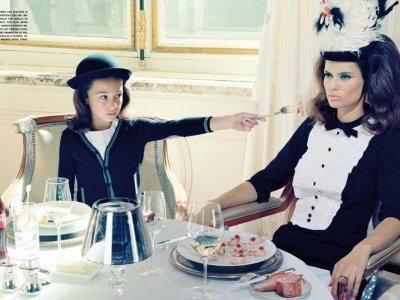 Although it's hard to believe, there are certain lies it's okay to tell your kids. You don't want to tell them forever, and because every parent is different, you may choose not to tell any lies to your children. That's okay too. However, any parent will tell you that there are lies it's okay to tell your kids, at least when they're young, or going through a particular stage. My parents told me many of these, and I never resented them, nor did I suffer any ill effects. Do you tell these fibs to your kids?

Sometimes, you just want something for yourself, something your child isn't supposed to have. In asking questions and remembering my own childhood, this usually has to do with chocolate. If your children smell chocolate on your breath, one of the lies it's okay to tell your kids, at least technically, is that you just slathered on some cocoa butter. I once also got the excuse that it was baker's chocolate, and I wouldn't like it. It was not baker's chocolate.

Not all parents tell their kids that Santa is real, of course, but it is one of the most common lies. Santa is foolproof for a while, because in addition to telling your children that a magical man is bringing them presents, the jolly old guy also works as an excuse to make your little ones behave. I distinctly remember my father picking up the phone to call the North Pole any time I was horrid. He's less threatening than the boogeyman, at least. My parents let me reach the inevitable conclusion of Santa's imaginary existence myself, when I was ready, but you may choose to reveal the truth to your kids yourself.

3. A Lady Sneaks into Your House at Night

Worry not, I won't list all of the imaginary creatures parents tell their kids about. However, in retrospect, the idea that a woman sneaks into your house, sticks her hand under your pillow, and steals your teeth is disturbing. Then again, the promise of money (or gifts) makes home invasion okay. This one only lasts until your kids lose all their baby teeth, and honestly, they'll have figured it out before they ever lose their molars.

I got told this one a lot. Some parents choose to be upfront about the death of a pet, while others want to wait until their children are a little older. Telling your kids that a beloved pet ran away or had to be taken to a farm is, I think, technically all right. It depends on the conversations you've had about death, the age of your child, his or her maturity, and the pet itself. At some point you'll need to have a frank, open discussion, but when your kids are young, you may choose to shield them from the loss of a beloved pet.

This one doesn't always stick, but parents use it every day. You might be having a fight with your spouse, you might be worried about a bill, and you might be feeling sick yourself. The point is, you don't want your child to worry, so you assure him or her that everything is fine. Sooner or later this little lie won't work, because in addition to intuiting your mood, your child will also see that everything is not okay. Still, shielding your babies from anything bad is completely understandable.

Threatening to turn around on your way to an amusement park or telling your kids that you'll never have another big birthday bash when they're acting up is kind of an okay lie … and kind of not. It will work up to a point, but idle threats never hold for long. Sooner or later, your kids will know you have no intention of turning around and going home … well, until you do. Then you can get a few more years out of little lies like this. Trust me, my dad did it on the way to King's Dominion once. Straightened me right up during car trips, though.

And sometimes you just tell lies to keep your kids safe and healthy. TV rots your brain. Your face will freeze like that. Soda stunts your growth. You don't want them to do bad things, so you say whatever you have to, if it means keeping them from it. They'll figure out you're lying eventually, but hopefully by then the good habits will be permanently instilled.

Again, some parents choose never to tell their children any falsehoods. Others decide that these lies, and others, are okay. There are no right answers here; whatever you chose, or choose, to do is the best decision for you and your children, but it's not necessarily the best course for other parents. Are there any particular fiblets you told your tots?