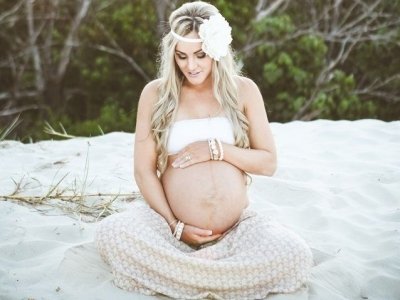 Many of the reasons women bleed in pregnancy are alarming, but not necessarily dangerous to the pregnancy or the mother. Until I had bleeding in my pregnancy, I didn't realize there were other reasons besides miscarriage! About 25% of all pregnant women experience bleeding, and roughly half of those cases go on to have healthy pregnancies. The best thing to do when you experience any kind of bleeding in pregnancy is to not panic or assume the worst, but to call your doctor as soon as you can. This list is not meant to be a medical diagnosis, but to ease your mind or your curiosity a bit, here are some reasons women bleed in pregnancy!

One of the reasons women bleed in pregnancy is due to implantation, which occurs often before the pregnancy is even discovered. After the egg has been fertilized, it makes its way down into the uterus to implant into the nutrient-rich uterine wall to begin development. Because the uterus is so rich with blood, sometimes during implantation slight bleeding can occur. Light, brown spotting is usually seen and it can last from a few hours to a couple days. Some women actually miss the bleeding because the amount can be small and undetected.

Ectopic pregnancies happen when the egg implants somewhere other than the uterus, usually in the Fallopian tube. Ectopic pregnancies occur in 1 of 60 pregnancies, and my husband was actually a tubal baby so it is possible for the outcome to be good if caught early enough! Symptoms of an ectopic pregnancy include sharp pain in the abdomen, strong period-like cramps, low levels of the pregnancy hormone hCG, and vaginal bleeding.

Miscarriage is the sudden loss of pregnancy and usually occurs sometime before 12 weeks. Although it's relatively common (15-20% of all pregnancies end in miscarriages), don't assume that vaginal bleeding automatically means an imminent miscarriage. I made this mistake and it wasn't pleasant! Symptoms include vaginal bleeding with clots and tissue, strong cramping in the lower stomach, and low back pain. If you do experience symptoms of a miscarriage, call your doctor right away. And remember, there is absolutely nothing you did that caused a miscarriage- most often it means there was an abnormality that prevented gestation from progressing.

A subchorionic hematoma (what I currently have) is the most common ultrasound abnormality that consists of a clot or pooling of blood between the uterine wall and the chorionic membrane. It's assumed that this is caused when the egg implants and partially tears away from the uterine wall. The majority of the time, small to moderate subchorionic hematomas resolve on their own by 20 weeks without any complications to the baby. However, If the hematoma is large enough, rarely it can cause placental abruption, miscarriage, and preterm labor.

Placenta previa is a second and third trimester condition where the placenta partially or completely covers the cervix. When the pregnancy progresses, the placenta moves up and leaves the cervix free for delivery but not in previa cases. Generally women are prescribed to lay low to prevent more bleeding, and C-section is usually preformed when it's possible, to prevent harm to the baby and mom from bleeding out during vaginal delivery.

Placental abruption is probably the scariest and most serious reason for bleeding in pregnancy and it's quite uncommon. This happens when the placenta partially or fully detaches from the uterine wall, either before or during labor caused by trauma, substance abuse, maternal age, or an underlying medical condition. The complications to mom are shock due to blood loss, blood clotting problems, and kidney failure. The baby can suffer oxygen depletion, preterm birth, and possibly stillbirth. Luckily, this condition is extremely rare and it is possible for your doctor to notice signs of an abruption before it happens and an emergency situation takes place.

Lastly, one very common reason for bleeding is simply the sensitivity of your cervix during pregnancy. Your cervix is very sensitive during pregnancy and irritating it in any way cause cause mild bleeding. A routine prenatal pelvic exam can cause slight bleeding as well as sexual intercourse or the use of tampons. While you should never use tampons during pregnancy, sex is usually safe for normal pregnancies and will not cause a miscarriage. If you do experience bleeding or pain during or after intercourse, call your doctor right away.