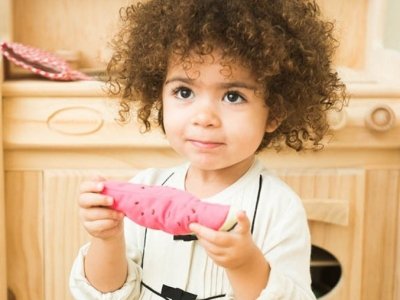 My first bit of advice to deal with the Troublesome Threes is to stand your ground. If your rule is no sweets unless you eat most of your dinner, stick to that rule; don’t give in when your child refuses to eat his dinner and then proceeds to have a tantrum because he wants ice cream. Sure, giving in will stop the tantrum, but it will also teach him that his whining and crying gets him what he wants.

While it is important to stand your ground, you also have to remember to choose your battles wisely. Of course, there are rules that must be followed, like holding your hand in a parking lot and not running with scissors; but there are times when the rules can be bent a little. For example, if your child wants to wear a different shirt than the one you have picked out, let him. He’ll be happier – and so will you!

Sometimes, you just have to ignore those outbursts. If you have clearly stated what the rules are and there is no bending, yet your child proceeds to have an outburst anyway – ignore him. Put him in a safe spot where you can see him and let him have his meltdown. Ignore his cries and whines and proceed with doing what you are doing. Once he realizes that you aren’t going to respond to his behavior, he’ll calm down. Make sure you follow-up with a talk about his behavior once he calms down.

While you may think that your three-year-old is perfectly capable of understanding your reasoning (and a lot of the time, he is), remember that he is still three and that he really doesn’t understand everything. No matter how many times you tell him that jumping off the back of a couch is dangerous, to him, it’s fun and he doesn’t get the danger part. Redirect his negative behavior. Give him toys that he likes or sing a silly song when you see he’s about to take that leap.

While yelling or a little tap on the hand may be your first instinct when things really get hot, refrain from trying to correct negative behavior with negative behavior. Yelling or hitting will only teach him that such behavior is acceptable, causing him to mimic you. Not to mention the fact that it could leave a powerful impact on your little guy.

Chances are your three-year-old is acting out for attention. He doesn’t care whether it’s good or bad attention, so long as it’s attention. Offer him praise when he’s doing something good and ignore the bad and you’ll soon see that the bad will diminish and the good will become more common.

No matter how tough a time you are having with the Troublesome Threes, always remember to love your child. He is, after all, just a three-year-old that is going through a phase. Let him know you love him, despite his bad behavior.

Do you have a three-year-old that is driving you bonkers? How are you coping with the challenge?