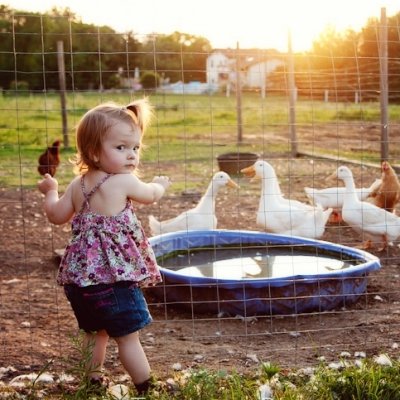 One of the big advantages of raising your family in the country is that you can afford a bigger house. House prices are usually much lower than in cities, and so you get much more for your money. You may be able to afford a three- or four-bedroom house, whereas for the same budget you'd only get a two-bedroom apartment that means you only have space for one child.

Living in the country means that you'll also have access to outdoor space for your kids. As any parent knows, kids need to let off steam and have space to run around. In the city, they'll only have access to parks at most, but in the country you'll have your own garden. There will also be wider open spaces such as fields and country parks.

Country towns are usually very family friendly, so you'll find them pleasant places to bring up your children. They're also compact, so you won't have to travel miles to take your kids to day care; in fact, the lower cost of living means that one of you may be able to afford to stay at home with the kids, instead of needing two incomes to pay the bills.

The country is obviously a much cleaner environment for your kids to grow up in. There's much less traffic and pollution, so they'll be breathing healthy air as well as being at less risk of an accident. They can safely ride their bikes, which is great exercise and far better than the sedentary lifestyles many kids lead.

Most of us living in a city only know our neighbors enough to say hello to. In the country, however, you're likely to get to know your neighbors much better. Chances are that some of them will become good friends, especially if you have kids of a similar age. It's much nicer when you have kids to feel that you are part of a community.

Parents worry a lot - it's in the job description. But the kind of things you worry about, such as gangs, crime and drugs, are far less likely to exist in the country. That's not to say that country life is absolutely trouble-free, but there is much less for your children to be exposed to. You won't have to worry that their phone will be stolen or something similar.

Finally, it's much easier to have a pet in the country, which is something that most kids want. If you want a dog there'll be space for it to run around. Your kids will also see a lot of nature, rather than just the odd tree or pigeon.

Kids can grow up quite happily in the city, but there are a number of reasons why you may decide that you'd rather raise your family in the country. Even confirmed urbanites may move to a quieter place for the sake of their kids. Would you prefer country or city life for your kids?