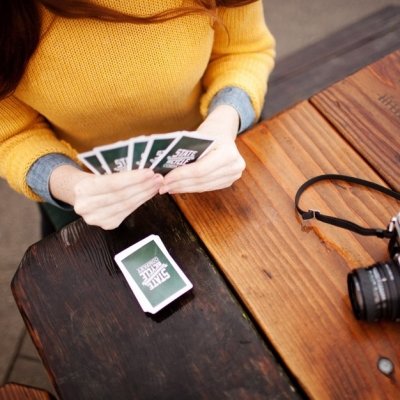 As my kids get older, they do less playing on the floor, which means fun card games take the place of that kind of fun. Even small kids can learn to play cards and you can while away several hours playing them. Fun card games are also a great thing to do on snow days or rainy afternoons. Check out these ideas and you may never get your kids to stop playing.

This is my favorite on this list of fun card games because even a toddler can play once he knows his colors and numbers. I taught my kids to play this game pretty young and now we spend hours as a family playing. I haven’t taught them how to keep score yet, but they can do the rest. If your child can match, he can play this game!

Kids love to put one over on their parents, and playing Go Fish is a fun way to let them do just that. You’ll go back and forth asking each other if you have a card that makes a match with one you have in your deck. When you ask your kids for a card that she doesn’t have, she’ll be delighted to see that you have to pick one up from the deck. She can easily match her own sets as you go to see who becomes the winner.

The only skill your child needs to play this game is to be able to figure out which number is higher than the other. Deal a deck evenly among you and your child, then each of you will slap down a card. Whoever puts down the higher card wins the hand. If you tie, put down another one. Whoever collects the entire deck first is the winner.

You can play Memory with a standard set of cards by matching colors and numbers. However, you can also buy decks specifically for playing Memory. What you’ll do is lay all the cards out in a grid pattern. Then you’ll take turns flipping over two cards. If you make a match, you keep the cards. You and your child will have to remember where the cards are to make matches. Whoever has the most at the end of the game wins.

You will need at least 4 players for this game. Give each player 7 cards. The players look at their cards and decide which suit they want to collect. To play, each player discards a card face down and passes it to the right. Everyone does this at the same time. If you get a card you need, keep it and discard a different one. The first player to get the same suit on all their cards shouts “My Ship Sails,” and is the winner.

This game is more enjoyable with more than just a couple of players, but you can play with as few as two. Deal an entire deck of cards. Start with one suit and lay the cards down in the order they belong. The player with the two starts, then the player with the three goes next and so on until the suit is complete. Repeat with the other suits. Whoever gets rid of all their cards first is the winner.

I’m not sure where the name of this game comes from, but it’s similar to Go Fish. The game works best with three or more players. Deal an entire deck of cards to the players. Each player can ask for a number card, but only if they have at least one of that number in their hand. The point of the game is to get four of the same number. Once you have all four, place them on the table. Keep playing until the cards are all used up. Whoever has the most sets of four wins.

Do you play card games with your kids? It’s a great way to kill some time, make memories and have some fun together. Which one will you teach your kids next?