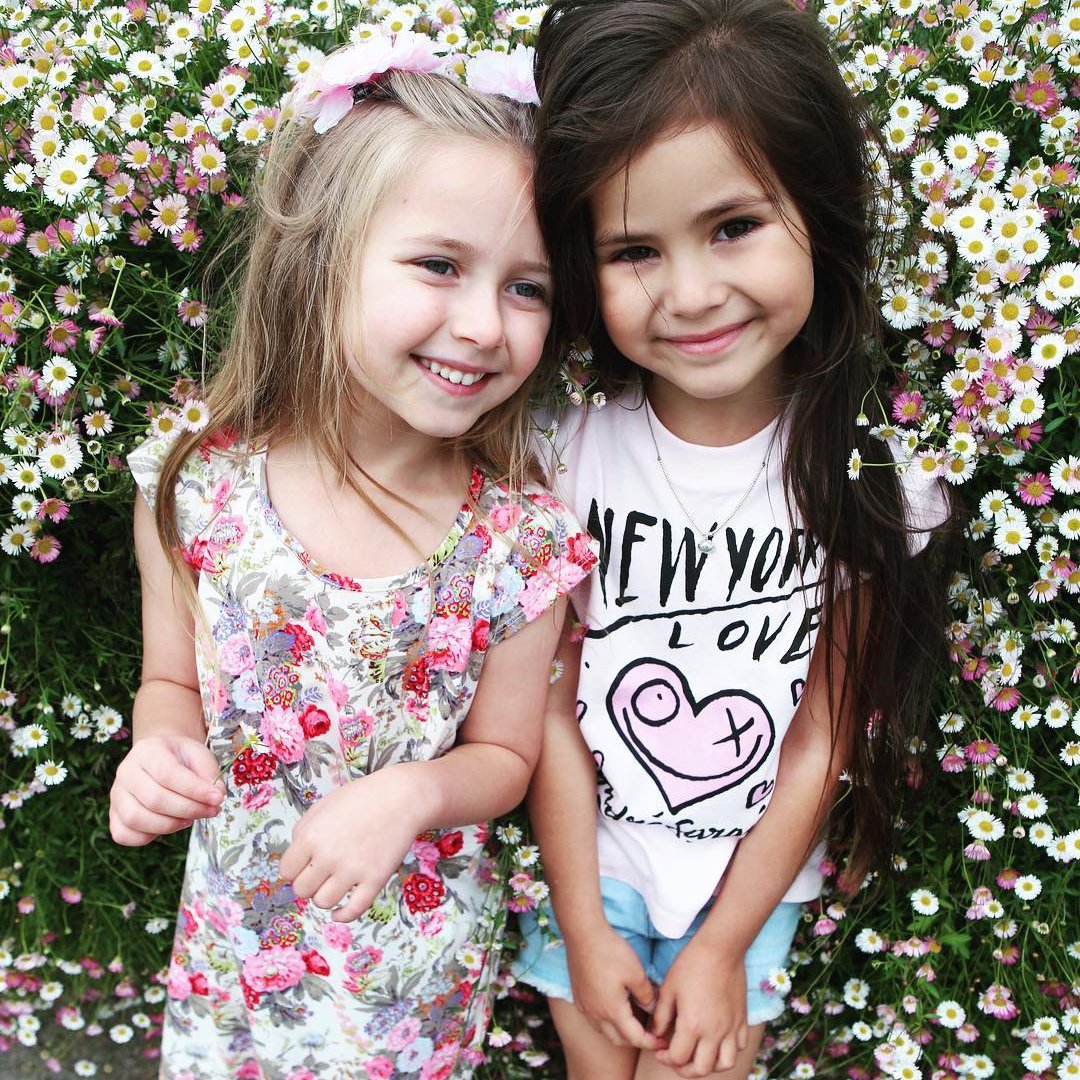 You're going to need these key phrases in bringing up daughters. Parenting little girls is a struggle, and I find myself repeating the same statements day in and day out. Beyond the “put your shoes on” and “clean your room” 200 times a day, I’ve realized that I say some more important phrases between the mundane daily conversation. Careful reflection on my conversations with my children has led to this list of six phrases that act as pillars upon which I have built my parenting philosophy. They reflect our society, the lessons I’ve learned as a woman and the hopes I have for them (and all girls) in the next generation as women. Here are some key phrases in bringing up daughters that you need to add to your vocabulary.

The consent conversation can never begin too early. As we’ve seen by the #metoo experiences (and pretty much all experienced as women in the world), consent is an issue, and I firmly believe we can begin this conversation with our daughters at a young age. There’s no reason to wait until children understand the ins and outs of intercourse to begin teaching them that their expressed wishes about their bodies need to be respected. In my house, it began with “Crazy Hair Day” in the third-grade classroom. When I picked my daughter up from school, she had a streak of pink color in her hair – one that wasn’t there when I dropped her off. I asked her about it, letting her know I wasn’t upset, just curious where it came from. That was when she told me another little girl asked her if she wanted pink hair chalk, and even though her reply was “no.” The other girl grabbed her head and marked her hair anyway. Against her will. Is this the same as sexual abuse? Absolutely not. But you know what? It’s the same on a very (VERY) basic level.

Someone touched you against your will, and even after you expressed denial. So, we had the talk. We didn’t talk about sex (they’re 8 and 7 after all), but we brushed on the basics: no one is allowed to touch your body without your permission. Not your friends, not your sister, not your parents. You have the right to say “no” where your body is concerned, and if someone – ANYONE – disobeys your wishes, you let a trusted adult know. We also discussed that consent is a two-way street, and that they need to ASK for permission before touching someone and respect their choices. Your desire (to chalk someone’s hair, give a hug, kiss them, etc.) does not outweigh their decision. It’s something we discuss on a weekly basis, talking about it in an age-friendly way, and sharing our experiences. It helps me keep my finger on the pulse of what’s going on in school (bullies galore), and reinforce my “NO MEANS NO” message.

Both of my girls have the sides of their heads shaved. They also have had purple and teal hair. As their mom, I’ve gotten a lot of dirty looks, veiled comments, or direct questions about why I let them do that to their hair. My answer is this – it’s their hair. It’s not mine. Their body, their choice. This goes for their clothing, their makeup, and any future holes they want to put into their body. If it’s not dangerous and it’s not permanent (and they’re not going to get sent home from school), I don’t stop them. This goes along with the consent issue – I am determined they grow up understanding that they are the masters of their bodies. If they hate the way they look, at least THEY made that decision (and will learn from their mistakes – just like I did when I cut all my hair off when I was a round pregnant lady).

3. You’re Such a Hard Worker

Being pretty, smart, creative, funny, etc. are all lovely traits. They are also totally out of our personal control. What is within our control, however, is how hard we work on things. Work ethic is essential, and none of our God-given gifts will benefit us much without hard work. I choose to praise my daughters on the amount of work they put into something, rather than commenting on their natural beauty, brains, and talents (which they have plenty of).

Got a 106% on a spelling test? You worked really hard studying those words. Your art project is beautiful – I can see you put a lot of hard work into it. This places a measurable guideline of work-to-success on their achievements, and, as far as I can tell, gives them a sense of accomplishment and responsibility. It also makes failures less painful. You didn’t fail your math test because you’re not smart, you failed it because you didn’t put enough work into studying and preparing. If you talk to the prettiest, smartest, most creative, and funniest people in our society, they’ll all tell you that their success is due to the hard work they put into something, rather than their natural gifts. My hope is to instill in my children the knowledge that success is measured by the quality and quantity of effort you put into something, not simply resting on your laurels.

4. If He’s Mean to You, It’s Probably Because He’s a Jerk

Keeping with the heterosexual relationship norms here, but this message applies for all kinds of sexual and emotional relationships too, I hate, hate, HATE the old “if he’s mean to you, it’s probably because he likes you” comment. Is it true? Probably. It begins in elementary school, when boys pick on us and tease us if they think we’re pretty. Unfortunately, it follows us into adulthood, where guys ignore our texts, say backhanded comments, and embarrass us in front of their friends if they “like us.” I could go on and on about the problems with that issue, but I’ll stick with my messaging to my daughters.

The truth of the matter is this: if he’s mean to you, it’s probably because he’s a jerk. Boys who are mean don’t deserve our attention or affection. They’ll become men who are mean and don’t deserve our attention or affection. As women, we need to expect more and give our attention and affection to the men who are kind to us. Those men exist and are easier to find then we are led to believe. The reason women in their teens and 20s date “jerks” is because we are taught that jerky behavior = love. I choose to teach my daughters that jerky boys are jerks and to save your affection for the nice boys. I hope it saves them some heartache in the future, but it will at least teach them to respect their right to kindness in a relationship.

Long gone are the days of blindly following what mom says. My girls, like most girls, are little bundles of developing opinions, and my goodness are those opinions strong. While I frequently disagree with their opinions, I know it’s because mine are formed by 30+ years of life experience, and their view of the world is totally different. And that’s okay. Rather than letting these differing opinions turn into complete household meltdowns, I encourage them to be the gateway to communication. My children know that I’m not always right and that I am open to hearing why they disagree with me. The key is the “why.”

If they want to be taken seriously, they have to present their argument – and not just argue, but debate. I want them to know their opinions are important and deserve to be respected. I also want them to know that they need to support their opinion with reasoning, rather than just gut emotions. This is a lesson they’re going to need in the real world, when they’ll need to disagree with a professor or a boss, or someone else in a position of authority. I’ve learned (rather painfully, might I add) that approaching these discussions with emotion is the quickest way to have your opinions dismissed. While our house still has to occasional emotional meltdown, we are opening the pathways for peaceful disagreement and reason-based dialogue. By listening to my kids, I’ve learned that they are wise beyond their years. By me listening to them, they’ve learned the value of approaching a conflict calmly and with a rational point.

Being a parent has been – hands down – the most incredible experience in my life. Seeing my children explore the world with fresh eyes has been amazing, and has forced me to open my eyes to the awe-inspiring beauty of the everyday. The ladybug on the dandelion next to the sidewalk, the grooves in a pumpkin, the variations in eye color – they notice everything, and now I do, too. Inevitably, they have questions. Inevitably, I realize I don’t have answers. Like Jon Snow, I know nothing. Rather than approaching this with my old stand-by of “make something up and redirect” (i.e.: the leaves change colors because it’s cold. Check out that red one over there), I’ve begun relying on my trusty smartphone. That’s right – I whip out my phone and look up the answer. It takes a few minutes, and we all learn something new. I used to have a hard time saying, “I don’t know,” but through embracing that fact, I’ve learned a ton of new facts about our world, and shared the experience of learning with my daughters. The last thing I want to do is squash their curiosity.